See IT AND ORDER IT NOW 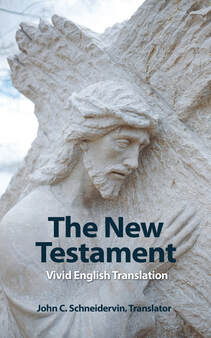 The Nature of This Translation: This Vivid English Translation (VET) of the New Testament is a faithful, accurate rendering of the original Greek text that is simple, clear, easy to understand, and pleasant to read and listen to. As no other translation does, the VET brings out the vividness of the original Greek text, so its English readers and Bible students are able to see for themselves and appreciate the vividness of the various original Greek writers and their intended meanings. Special attention was paid to translating all the different kinds of Greek verb tenses according to their respective uses to render their vividness in the VET’s text. Unlike the VET, popular English translations smooth out the verb tenses into a dead level translation that too often misses the vividness that the Greek verb tenses add to the text, thereby obscuring the original writer’s meaning. As often as possible the VET also translated the emphasis of the original Greek wording. The Greek writers commonly chose their word order according to the stress in their mind at the time. The VET chose to bring out that emphasis. The VET has essentially a literal word-for-word correspondence with the original Greek text to bring the reader and Bible student as close as possible to that original Greek text. When a word-for-word translation of a verse would have resulted in a rendering that would have been difficult for the reader to understand, the verse was translated instead sense-for-sense in a readily understandable idiomatic English. Even children can read the VET with great profit and blessing.


For more details about this translation and its translator see the Preface.
See It And Order It Now

Overviews of the Books of the New Testament

Each book of the Vivid English Translation Of The New Testament contains an overview of its respective book at its beginning.  In this webpage version the section headings throughout each book make up an outline of the book.
Click on the Preface or book of the New Testament below that you wish to read.